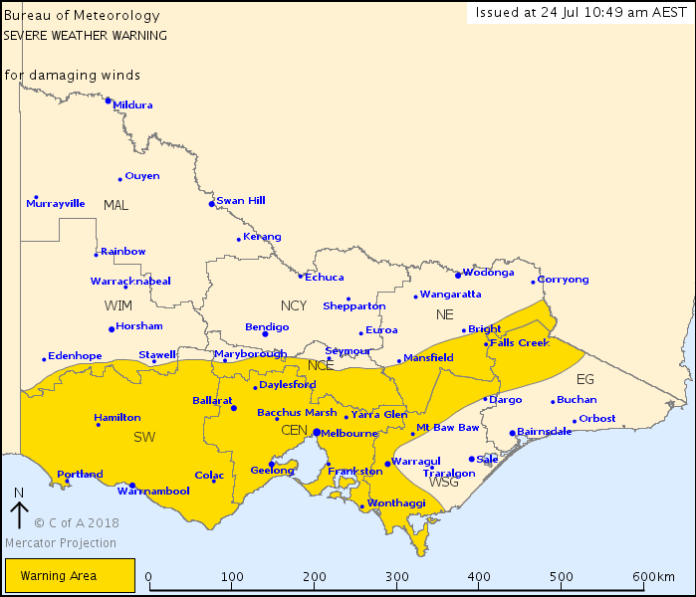 THE Bureau of Meteorology has issued a severe weather warning for people in the North Central, Central and South West districts as a cold front creates damaging winds across the state.

North to north-westerly winds will strengthen today (July 24) as another cold front moves eastwards across Victoria.

Damaging winds, averaging 60-70km/h with peak gusts of around 90km/h are possible within the warning area during Tuesday.

“We’ll see lighter showers and some wind gusts up to 90 or 100km/h. Hopefully it won’t be as bad as it was last night, but it should only last for an hour or so. Once things slow down tonight, we should have a few days of much lighter winds.”

Elevated areas and the south-west coast are considered to be most susceptible. Winds will increase from the west during the day, then ease later in the afternoon and evening.

Damaging wind gusts are most likely with showers during the afternoon as the cold front moves through.

Over alpine areas, winds are expected to gradually increase during the day to average 70-80km/h by later this afternoon, with peak gusts of 100-110km/h, before easing overnight.

Locations which may be affected include Warrnambool, Ballarat, Geelong, Melbourne, Wonthaggi, Bacchus Marsh and the alpine resorts.

The State Emergency Service advises that people should move vehicles under cover or away from trees, secure or put away loose items around your house, yard and balcony, and keep clear of fallen power lines.