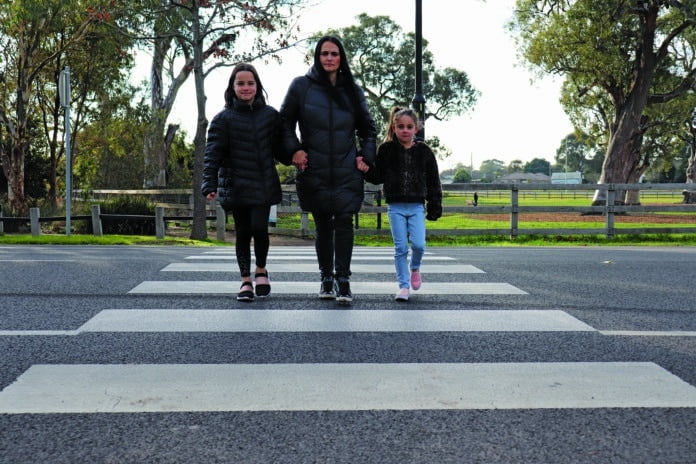 A WOMAN and her kids were almost hit by a car that was overtaking another vehicle while both were driving through a pedestrian crossing right next to a children’s park in Mernda.

The shocking incident occurred recently when Zelda Levay, and her two children Scarlett, 10, and Coco-Bloom, 5, crossed the pedestrian crossing next to Mernda Village Adventure Park on Mernda Village Drive.

The rattled mother retold her story on Thursday, July 12. During this interview, the Whittlesea Review saw vehicles failing to give way on three separate occasions.

Ms Levay said someone could die.

“So many cars drive past and don’t stop for the pedestrians who are crossing on the road, we need traffic lights here,” she said.

“If you are a parent, you are always anxious about your kids crossing the road, it so dangerous. Parents with prams have nearly been hit.

“The crossing is on a sweeping bend without lights or signage, something needs to change.

“The kids and I were on the park side waiting to cross when a car, who seemed to be slowing to let us cross, began to roll towards us. Then the car behind her decided to overtake the driver and we had to get out of the way.”

Other residents have also spoken of their experiences on the road.

Hayley Collins said she thought the crossing was dangerous.

“I’ve almost had my pram hit here. And my poor doggo has been frightened numerous times trying to cross from the dog park. It’s dangerous,” she said.

While there were general concerns about the crossing, one resident, Russell Rowley, believed the incidents highlighted a bigger issue.

“I’m just sick of people speeding through Mernda Villages Estate in general; going to start setting up my own spike strips,” he said.

The Whittlesea Review understands councillors will be contacted about the next step the residents can take.