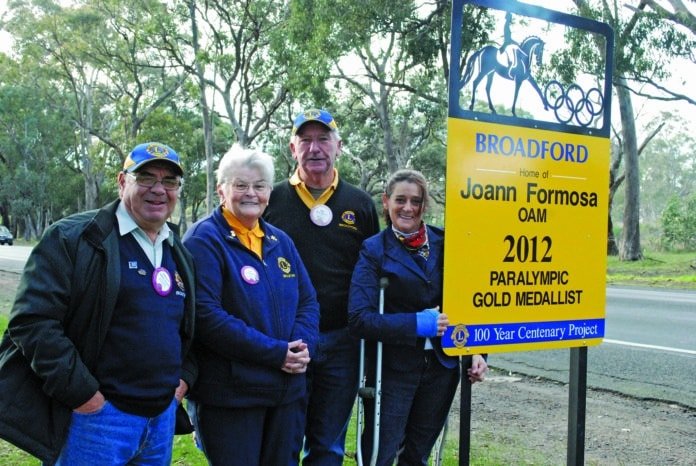 BROADFORD Paralympian, Joann Formosa OAM has been honoured by the Broadford Lions Club with a sign at the entrance to the town she grew up in.

The sign was designed and produced by Lion Bill Doherty as part of the Lions’ Centenary Project.

“This is fantastic, I am so honoured to be recognised by the Lions Club and the town I love,” Ms Formosa said at the unveiling.

“Bill has done a great job and Joann is a person worthy of recognition. Her achievements are an inspiration to us all,” Ms Overend said.

Ms Formosa suffered spinal cord and nerve damage, caused by a riding accident. She has gone on to represent Australia is a host of equestrian events, peaking with Gold at the 2012 London games.

She started competing in equestrian in 1980. Before her accident, she competed in dressage and show jumping events. She helped found Kilmore Adult Riding Club and is a member of Riding for the Disabled Victoria.

She has also competed in the 2006 World Equestrian Games, where she made her national team debut and competed in her first competition outside Australia.

In November 2013, Joann Formosa was awarded the Federation Equestre Internationale – Against All Odds award. She was awarded an Order of Australia Medal in the 2014 Australia Day Honours for service to sport as a Gold Medallist at the London 2012 Paralympic Games.

As for the future, Ms Formosa is not one to rest on her laurels – she already has the Tokyo Games in her sights.

“I plan on competing at the Tokyo Paralympics. We are well on track for that. Once that is over, I think it is time for retirement. A nice little two acre property in Broadford would be nice,” she said.

Pick of the best