Home News Community Only the beginning for Romsey Ecotherapy Park 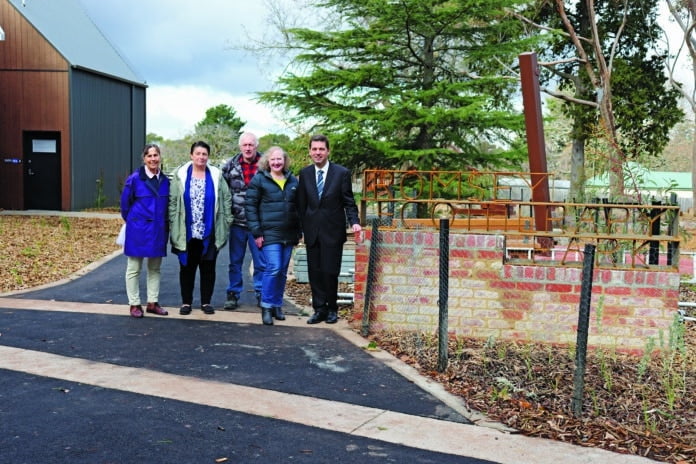 THE Romsey Ecotherapy Park committee is celebrating the first stage of the park’s completion, but said there is much more work to do.

The committee met with Liberal candidate for Macedon Amanda Millar and Shadow Minister for Environment Nick Wakeling at the park on Friday to take them through their progress and plans for future development.

Romsey Ecotherapy Park president Raelene Mottram said they haven’t yet been successful in receiving funding to complete the rest of the park.

“We’re not done yet. We’re trying to secure funding to get it done. We’re looking at lobbying politicians. We’ve not had any funding from the state government,” she said.

“Our funding has only come from federal government and Macedon Ranges Shire Council. Council had to purchase building from the state government at a reduced price of $353,000.”

Approximately $1.9 million is required to complete the project according to estimates made by Romsey Ecotherapy Park, with three spaces still to be completed in the Sensory Therapeutic Space, Arts and Culture Space and Woodland Ramble.

The Sensory Therapeutic Space is what the committee calls the ‘hero piece’ of the park. It requires around $900,000 to build and includes running water features and an Ephemeral Billabong.

Mr Wakeling said the project is a “great example of how government investment can actually provide important community infrastructure”.

“I pay tribute to the work of the active volunteers in the community who have been pushing to see this and clearly they’ve got more they would like to see in the future with future constructions.”

“It’s great to see this project coming together. This was an exciting investment by the federal government. I know there are a lot of new young families moving to Romsey and they’re excited about coming to see this site opened in the next few months,” she said.

Member for Macedon Mary-Anne Thomas said she was thrilled that the first stage of the Romsey Ecotherapy Park is complete.

“It’s a fantastic initiative and one that will be a great asset to Romsey and the broader community,” she said.

“In May, Minister for Regional Development Jaala Pulford joined me on a tour of the park and was really impressed with its design and the professionalism of the team behind it. I will continue to advocate for this wonderful project.”