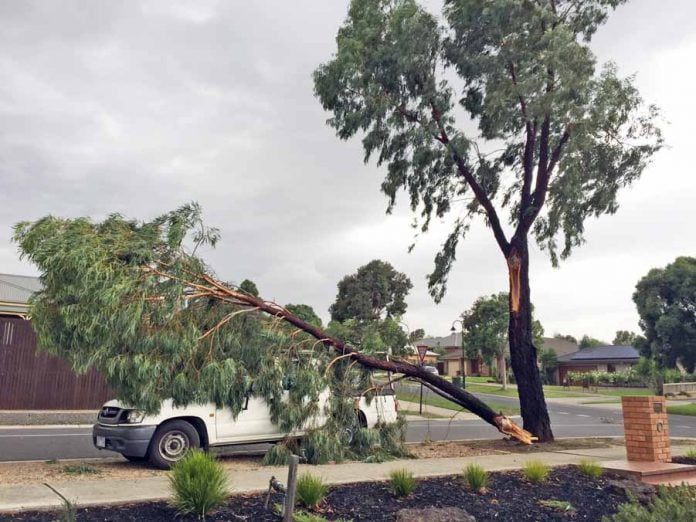 COMMUNITY members in Doreen have been left stumped over council’s actions regarding trees on their nature strip.

For the past five years, the residents of Hanna Crescent, Doreen have been complaining about the Eucalyptus sideroxolyn (Ironbark) trees in their street.

Resident Jack Willemse said the limb dropping species are dangerous and caused damage to footpaths, vehicles and even a lamp post.

“It has been going on for a long time; the trees break and they’re dangerous,” he said.

Mr Willemse explained how one of the trees had to be pulled out after it fell down on one of the neighbour’s properties. Luckily, no-one was hurt as there had been a party at the property where children had been playing only a few hours prior to the tree falling.

Responding to the complaints, council said it intended to remove the trees and replace them with the same species.

In a letter seen by the Whittlesea Review council stated the trees showed “signs of very poor mechanical structure which may lead to section failures”.

“It was determined that these trees will be removed due to the issues the trees are currently causing and may cause in the future,” the letter said.

“It has been determined that the nature strips will be replaced with the same species being Eucalyptus sideroxolyn (Ironbark).”

Frustrated with the actions of council, the households in Hanna Crescent then joined together and delivered a petition to council officers. Residents were astounded when council said it would remove the Ironbark trees and plant gum trees.

“I love gumtrees but they have got to be in parks and gardens out in the open, not in residential streets where it’s dangerous,” Mr Willemse said.

“We would like to get a tree that drops leaves only once a year and is not so large and aggressive. We only have small nature strips.”

Another resident, Warren Bowen said he wanted trees in the street but ones that are appropriate for the area.

“We want the trees out and we want appropriate trees for the size of the nature strip,” he said.

“A lady from council rang the other day and said we would have a choice of two gum trees. Gum trees just aren’t appropriate for where we are.”

In a win for residents, City of Whittlesea Director City Transport and Presentation, Nick Mann told the Whittlesea Review late Friday that council listened to residents and will not replace the trees with gum trees. He also said the current Red Ironbark trees were planted by a developer and are now considered not the most suitable trees for the location.

“After feedback from residents, council agreed to replace the trees with a different species – not gum trees,” Mr Mann said.

“We are writing to residents giving them a choice of two species and will base the decision on the preference of the majority of residents in Hanna Crescent.

“The choice of street tree species for a particular location is determined by a range of factors including the size of the nature strip and neighbourhood character and is included in council’s Street Tree Management Plan.”

The tree removal works are expected to commence April 2018.