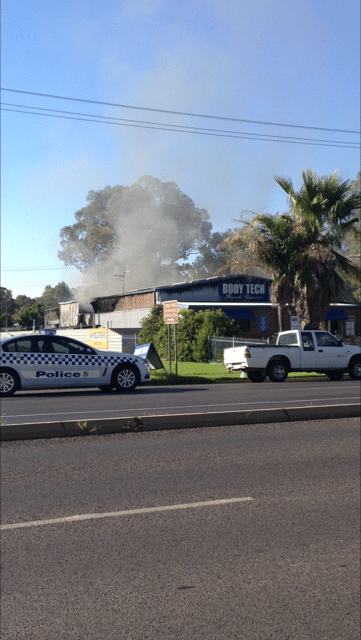 UP to 25 Country Fire Authority (CFA) volunteers are battling a blaze at a business on Emily Street, Seymour, after a fire broke out at 7am on Thursday.

A fire began in a spray booth which prompted an evacuation of the business but it took an hour to bring the event under control.

CFA District 12 Operations officer Justin Dally said the local bridge, and crews from Shepparton, Bendigo and Hilldeen, all did a fantastic job to help put out the fire.

“It happened first thing and on arrival the spray booth was well alight,” he said.

“Crews aggressively attacked the fire to contain it… and it took an hour to bring it under control.

“The heat and smoke damage has spread through the building. There are no suspicious circumstances.”

While the crews remain on scene, it is expected they will leave at about 4pm.

Mr Dally said the business owners followed all of their processes to make sure people were safe and he wished them good luck for the road ahead.

He also thanked all of the volunteers who give up time in their lives to help out.

“There are men and women who turned up, like those from Hilldeen and Seymour, who are all volunteers,” he said.

“They have given their time to protect the community and I thank their families who allow them to do so.

“We wish everyone a Merry Christmas and hope everyone will stay safe on our roads.”

A day for old friends