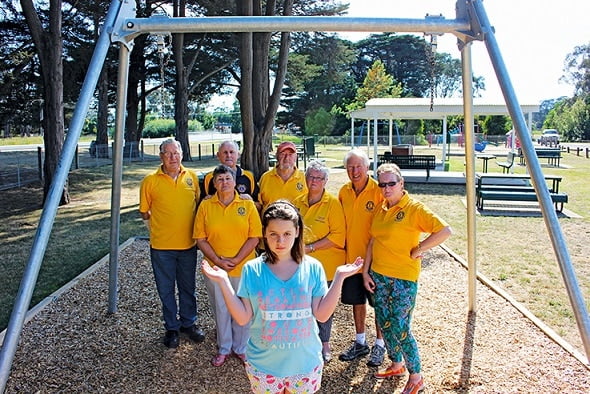 THE Whittlesea community has been left outraged following the theft of a basket swing from Lions Park.

A community member has kindly come forward and donated money towards the replacement of the swing, however, with concerns regarding the security of the playground, the Whittlesea Lions Club is calling on community members to help them fundraise for CCTV to be installed.

Installed late last year as part of the park’s $40,000 upgrades, the Whittlesea Lions Club worked hard to fundraise $20,000 by running sausage sizzles, selling Christmas cakes and working at the Whittlesea Show. The remaining $20,000 was contributed by federal government grants.

“It took us a long time to put that $20,000 together. We all found it unbelievable; we couldn’t believe someone would do that. The whole club is devastated,” Ms Stewart said.

“If we have to replace the swing that’s money we could have used to help someone else. That’s money that’s being taken away from us and we have to think twice about who gets the money and where we spend it. Everything we raise goes back to the community.”
Member Robyn France said she stunned.

“As volunteers we’re out there putting into the community and this person has taken from the community,” she said.

“This doesn’t happen in our community. People support this community and it shocks the community when something like this happens.”

Dean Jordan confirmed to the Whittlesea Review his family run business, Just Spas in Mill Park, will be donating money towards the replacement of the swing.

Living in Humevale, Mr Jordan said his family used the playground quite regularly and he was disappointed the swing had been stolen.

“It’s more about the effort they (the Lions Club) go to. They get this up and running… and some turkey comes along and cuts it down for their own benefit. It’s disgusting, the community deserves more,” Mr Jordan said.

Federal Member for McEwen Rob Mitchell called the theft disgusting and appealed to residents to report any information surrounding the theft to the police.

“It’s disgusting that someone would do this to a community group who spend a lot of time out in the community fundraising and helping people,” Mr Mitchell said.

“To have it (the swing) stolen is appalling. If you know someone who has got it in their backyard, report it to police immediately.”

With many in the community, including Mr Jordan, expressing concern regarding the security of the park, the Lions Club are now fundraising for CCTV to be installed.

“Unfortunately, we don’t want to be big brother but it looks like we might have to be,” Lions member Ms Hayward said.

If you would like to support the Lions Club and help raise money for security system at the park please donate at www.gofundme.com/help-the-lions-club-stolen-swing.
For more information regarding the Whittlesea Lions Club please call David Cordell on 0418 348 057. The Lions meet on the second and fourth Tuesday of the month at the Whittlesea Bowls Club at 7pm.